The word "Tewahido" is the Ethiopian term (meaning "made one") which is the best expression conveying the faith of the Church, since it emphasizes the inseparable unity of the Godhead and Manhood in the Person of Christ. The Church's official title is "የኢትዮጵያ ኦርቶዶክስ ተዋሕዶ ቤተክርስቲያን" - The Ethiopian Orthodox Tewahido Church.

We believe in our Lord Jesus Christ, the one Son of the Father, who was with Him before the Creation of the world. Light begotten of Light, True God begotten of True God, not created. He is equal with the Father. There is nothing in heaven and earth that exists without Him. Mt. 3:17, Jn. 1.1:4. For us and for the salvation of human He came down from heaven; by the operation of the Holy Spirit He put on flesh of the holy Virgin Mary and became man. In the time of Pontius Pilate He was crucified for us suffered and died and was buried. On the third day He was separated from the dead and rose. With glory He ascended to heaven and sat on the right hand of His Father, and He shall come again in honor and glory that He may judge the living and the dead, and there is no end to His Kingdom. Mat. 1:20-21, 1pet. 3:18; Phil. 2.6-8; Rom. 5.8; Cor. 15: 3-4; 1Pet. 3:19-20. We believe in the Holy Spirit, the Lord who saves, He who proceeds from the Father; together with the Father and the son we worship Him, we honor Him, we glorify Him. We believe in one Holy church, which is over all, the assembly and congregation of the Apostles, Eph. 2:19,20,22. We believe in one Baptism, that it was given for the forgiveness of sin. Eph. 4: 3-6, Ps. 32:1-2, Eph. 1:6. And believing in the resurrection of the dead, we hope for everlasting life to come. 1Cor. 15: 22-24; Jn. 10:27-28.

The dogmas we believe are contained in this symbol of the Faith. No one has any right to add to or take from it. Other dogmas are contained in the dogmatic definitions of the Third Council in Ephesus which declared that Christ is one in hypostasis, perfect God and perfect Man, is the Son of God, without a mother on the higher plane, and the Son of His Mother without a father on the lower. His ever-Virgin Mother is properly and truly called the Mother of God, as having properly and truly given birth in the flesh to God the Logos.

Sacred Liturgy is the very heart of Ethiopian Orthodox worship. All the various kinds and types of Orthodox prayer and ritual cluster around the Sacrifice of the Mass that was instituted by the Lord the same night in which He was betrayed (1Cor. 11:23-25). The Church of Ethiopia has fourteen Anaphoras, a unique phenomenon in any Christian Church. Each is used on special occasions to mark the observance of a particular Holy day. Though the Anaphoras differ in length and content, they have common characteristics. They stress the Incarnation, the Last Supper, the Crucifixion and the Resurrection. In principle the Mass is conducted in Ge'ez, the ancient classical and liturgical language of Ethiopia. Today however, the readings and certain portions of the liturgy are in the vernacular, Amharic. The congregation, both men and women, may join in the singing.

When presiding over liturgy, in addition to the celebrant (main priest) and at least one other priest, the presence of three deacons is required.

Angels are from among those who were created on the Sunday (Jubilee 2:6-8). The Holy Bible says that angels are made from fire and wind (3 Mac. 2:10-11). Angels do not reproduce but remain as they were originally created. They are by nature thinking, speaking, living and powerful. They are free from affliction of sickness and death. Their number is not limited. They are divided into orders and chieftainship. They were divided in one hundred orders and into ten heavenly places. Angels are close aides to God. They are always by His throne praising Him (Rev. 4:8-11). They are fast in their service (Ps. 103:4, Heb. 1:6). They ascend and descend between God and man (Jn. 1:52, Heb. 1:14). When generally explained the role of Angels can be said:

The notable seven Archangels are: 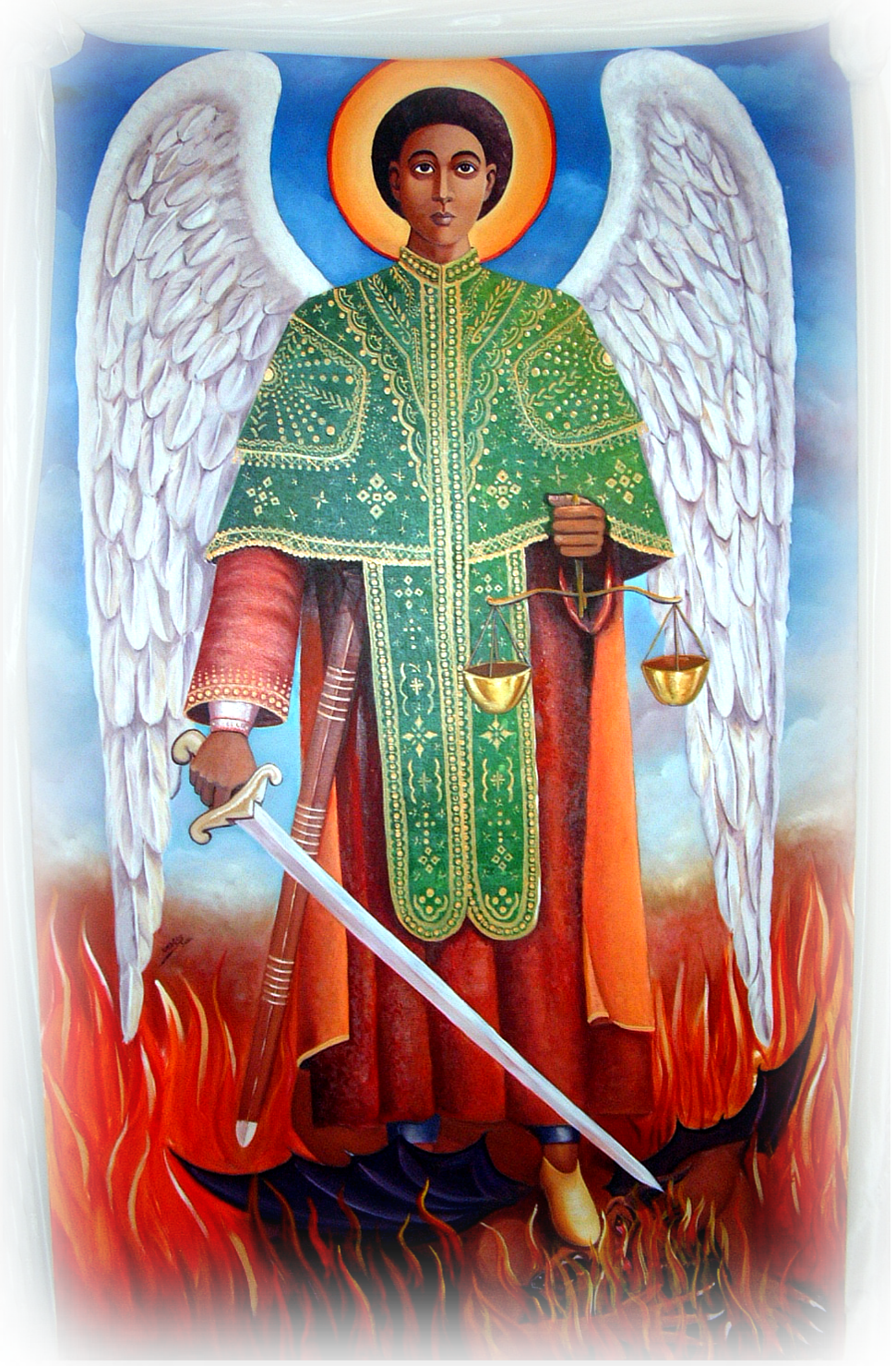 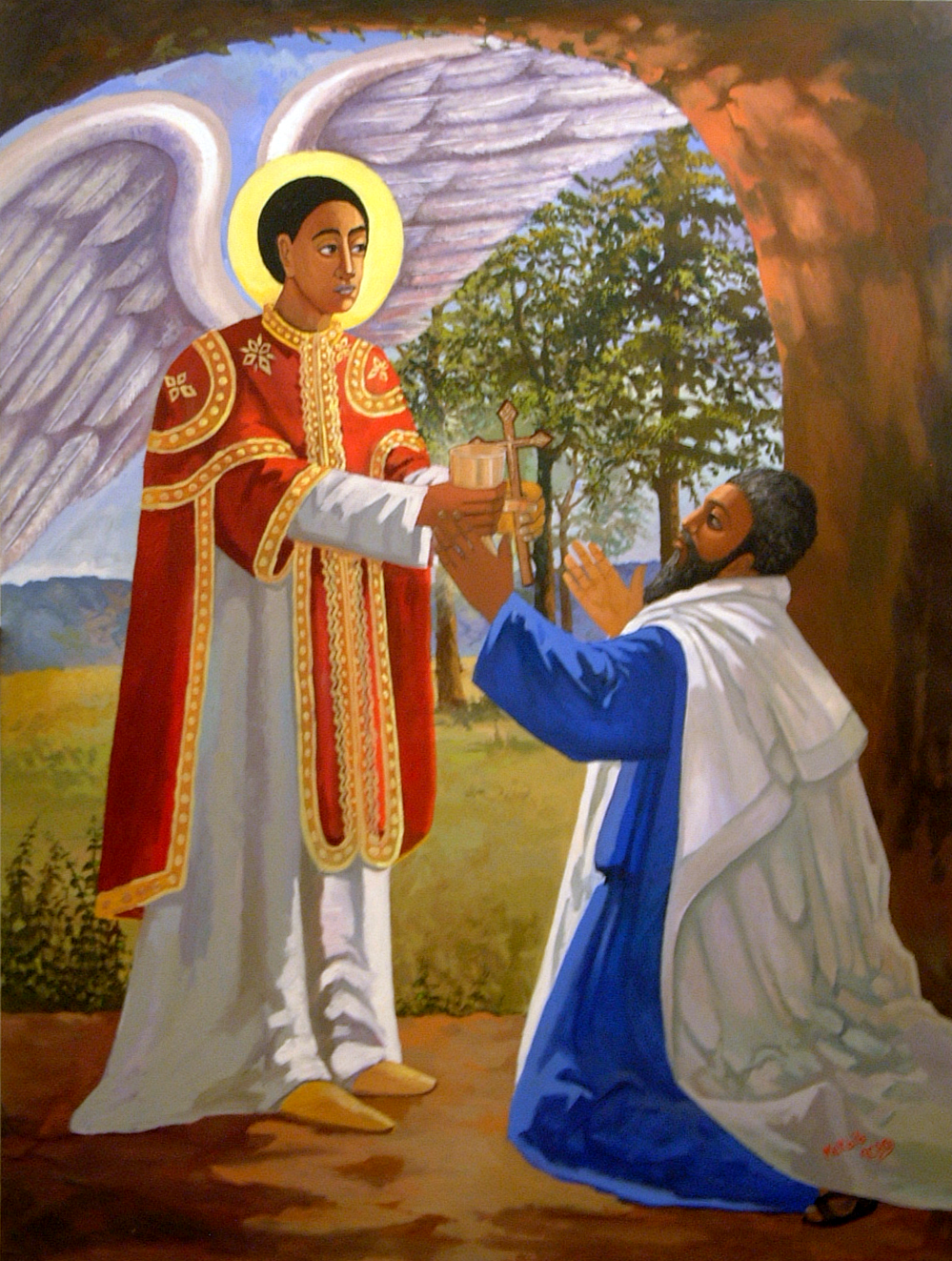 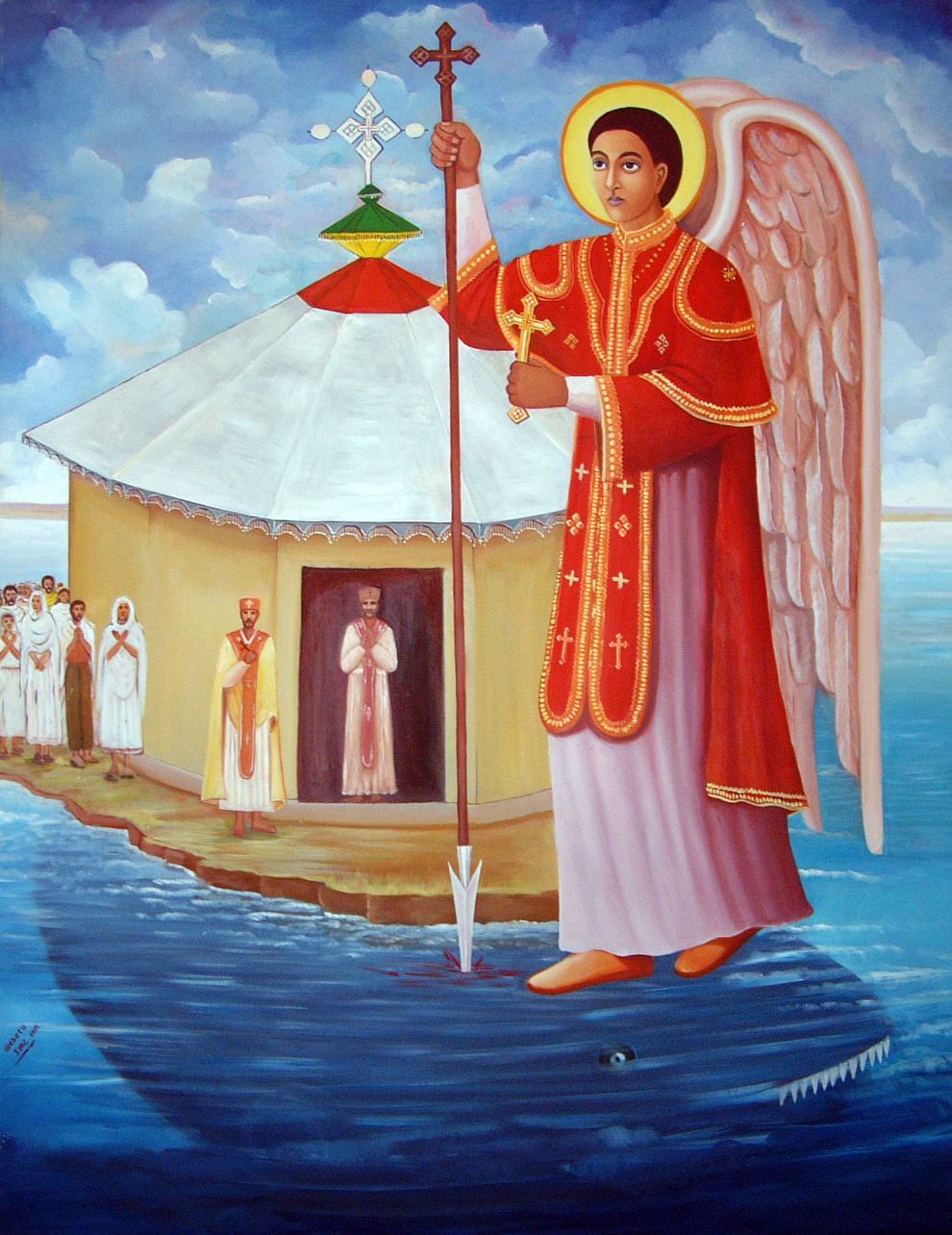 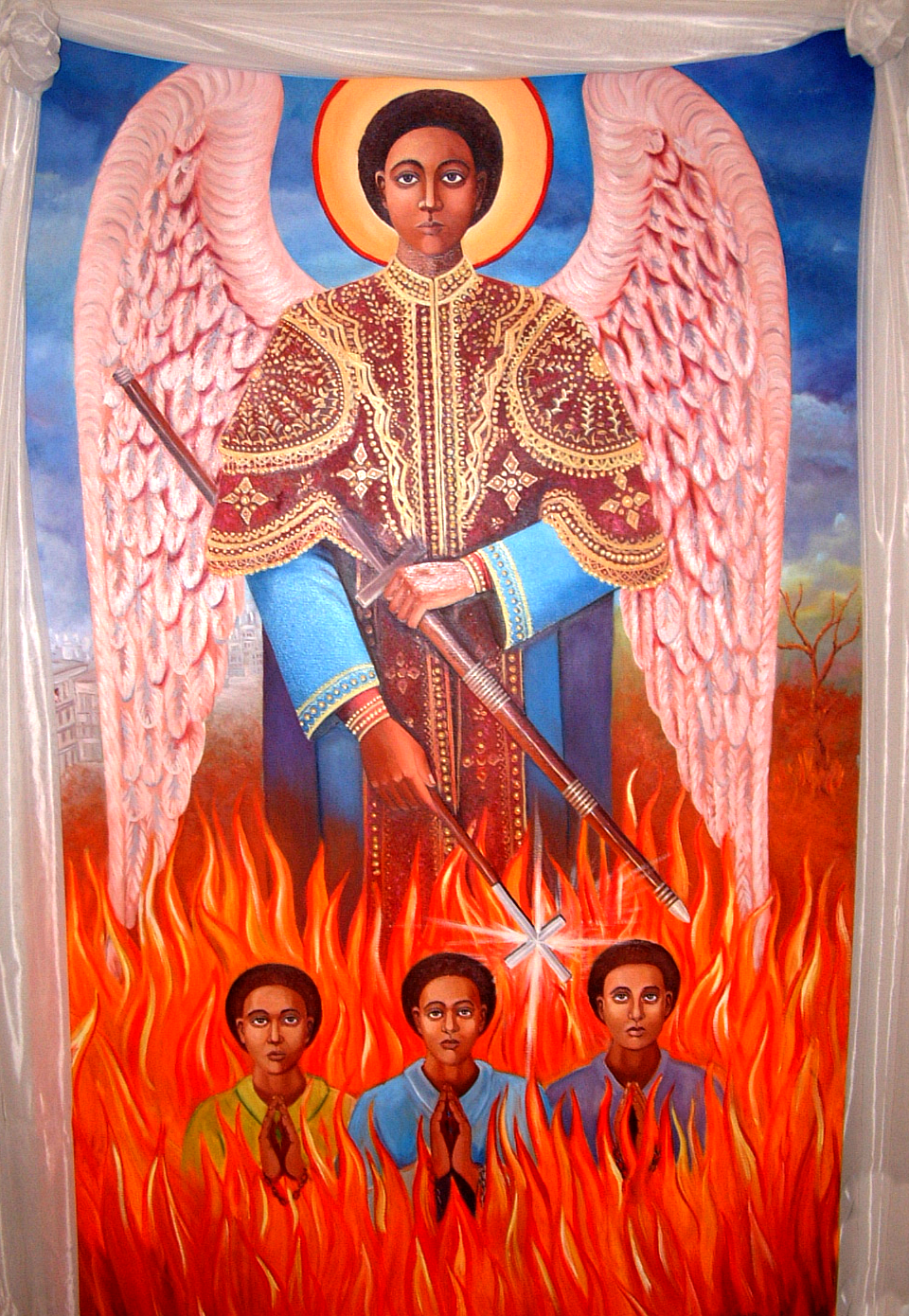 Our church believes in the ancient custom of honoring the heroic servants of God but it does not offer them the adoration, which befits only God. It has on its list of known saints hundreds of names - men and women. The saints are chosen friends of God; they are souls that have served Him well. They are deserving of our homage, because of their holiness. They are united to us, we honor them and they pray for us. They present our prayers to the Almighty and unite them to their own; we honor them with religious homage in order that thereby we may obtain the assistance of those beloved friends of God. When we offer homage to them, when we build churches and institute feasts in their honor, we are not depriving God of adoration, we are adoring Him the more because we are honoring the results of the work of His grace.

We have a prodigious number of saints and martyrs in the Church and every saint has a day of the month and/or of the year assigned. Among the Saints the most celebrated are St. George, St. Kerstos Semra, Abune Tekle Haimanot, St. Yared, St. Lalibela, St. Iyesus Moa, Gabra Manfes Qiddus, John the Baptist, the Apostles, etc. According to the Ethiopian culture each family has its own patron saint or angel whose feast it celebrates every year both in church and at home when friends and neighbors are invited.

THE VENERATION OF IMAGES (ICONS)

The veneration of images (icons) is a part of the Ethiopian Orthodox Church tradition. But this veneration is directed not to the images as such, but to the holy persons whom they portray. The Orthodox venerates flat, two-dimensional icon; they do not pray to three-dimensional statues because these representations may be too realistic and may become in themselves idols of veneration. Images of our Blessed Virgin Mother, Her Son Jesus Christ, the Apostles, the angels and saints are not worshipped at all. The Orthodox adores no one but God. The image of the person venerated is honored only as a means for directing and increasing our homage and veneration towards that person and through him to God by whose grave he became what he was. We do not adore the figure of the sacred cross. Offerings of incense and light are given to the figure of the cross, to the holy books of the gospels, and to other sacred objects in order to do them an honor that passes to the person represented. By kissing or uncovering heads to the images of Christ, the Cross, the Virgin Mother of God and other saints we adore Christ and honor His mother and saints and angels.

There are many paintings in the Ethiopian Churches. There may be seen St. George with his horse, St. Michael with his wings, and St. Mary with Her Baby, and Christ hanging from the cross. These holy paintings are hung on walls in most homes and reverently kissed. A painting of Adam and Eve in the garden and of the Emperor, will be found in many churches. In each church also there is of necessity a painting of the Tabot according to the name of the saint.